Sewer Line Cleaning & What are the different kinds of systems? 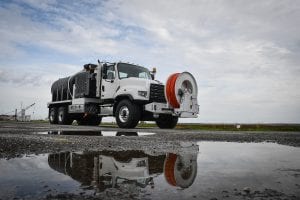 Sewer line cleaning is important to have a livable and workable environment for us to live our daily lives, and municipalities must sustain a clean and safe sanitary environment. This is accomplished by having an efficient process for removing sewerage from the source to an area for safe treatment and disposal. Sewerage is the infrastructure that conveys wastewater (sewage) or stormwater. It encompasses components such as receiving drains, manholes, pumping stations, sump pits, storm overflows, and screening chambers of the combined sewer or sanitary sewer.

The combined sewer is a collection system that collects both wastewater and stormwater. This type of sewer design is no longer used in building new communities, but many older cities continue to operate combined sewers. Combined sewers can cause serious water pollution problems during combined sewer overflow (CSO) events when wet weather flows exceed the sewage treatment plant capacity. The discharges contain human and industrial waste, and can cause beach closings, restrictions on shellfish consumption, and contamination of drinking water sources.

Stoppages of a sewer line can happen in many different ways and can be caused from a partial blockage or a full obstruction. The most common reasons for an obstruction to occur are:

When a stoppage occurs, material will backup and eventually overflow the system up to the point of blockage. If this happens, businesses, homes, and streets can be damaged. Freshwater resources can be tainted as well which can spread diseases and risk public health.

Current design that newer communities use are sanitary sewers. Municipalities that use sanitary sewers have a system that is designed to transport sewage alone with a separate system where storm drains convey surface runoff directly to surface waters (streams, rivers, etc.). Sanitary sewer overflow (SSO) is a condition in which untreated sewage is discharged from a sanitary sewer into the environment prior to reaching a sewage treatment facility. Frequent causes of SSO spills include:

As with most things, performing routine inspection, cleaning, and maintenance of the sewer and storm systems will have it functioning as efficiently as possible. Having an efficient sewer system will help with:

Jet Flushing is used to describe the most common method used to open a slow or stopped drain line. Flushing equipment consists of using a jetting nozzle that is inserted into the entire length of the sewer line, which will flush material back to the manhole using high-pressured water. If the debris is heavier it may require more than one attempt to clear the line. In cases of heavier debris, there could be multiple different blockages in which case the operator will have to flush the first stoppage, go further down the line and flush the next blockage until all points of blockage are removed.

Sewer Jetting is a term used to describe a method used to open and scour drain lines with the use of high-pressure water. A jetter uses water pressurized between 2000 to 6000 psi to cut through small root fibers, dirt, organic debris, grease, and oil. Jetters are commonly used in restaurants and auto garages where grease from kitchens and oily sludge from automobiles collects in drain lines. While jet rodding can open a drain line coated with grease or oil, only a jetter can scour the line removing the majority of the grease and oil.

Wastewater lift stations are facilities designed to move wastewater from lower to higher elevation, particularly where the elevation of the source is not sufficient for gravity flow and/or when the use of gravity conveyance will result in excessive excavation depths and high sewer construction costs.

Key elements of lift stations include a wastewater receiving well (wet-well), often equipped with a screen or grinding to remove coarse materials, pumps and piping with associated valves, motors, a power supply system, an equipment control, alarm system, an odor control system, and ventilation system.  Lift station equipment and systems are often installed in an enclosed structure. All these parts of a lift station can be blocked or damaged so cleaning is required to get the lift station working properly.

Sump pits are typically only for moving groundwater out of an area. A sump pit is in the ground with perforated sides that allow groundwater in with a single pipe to eject the water out.

A wastewater treatment plant (WWTP) is the physical infrastructure that is used to convert wastewater into an effluent that either can be returned to the water cycle with minimal environmental issues or reused (water reclamation). Built-up sludge found in pits and wells at the WWTP can negatively affect the wastewater treatment process. For this reason, combination machines are used to clean these systems by flushing the material into a vacuum tube.

A stormwater sewer system is designed to drain excess rain and ground water from surfaces such as streets, car parks, parking lots, sidewalks, and roofs. Storm drains vary in design from small residential dry wells to large municipal systems. They are fed by street gutters on most motorways, freeways, and other busy roads, as well as towns in areas that experience heavy rainfall and flooding. Many storm drainage systems are designed as gravity sewers draining untreated stormwater into rivers or streams.

Because of the amount of debris, trash, and pollutants that enters a storm drain, they need to be cleaned regularly. If these drains are not cleaned, they could clog which causes the drains to overflow, leading to increased pollution and erosion. Heavy debris (i.e. sand) will sit at the bottom of the big pipes if not cleaned regularly which will reduce the efficiency of carrying the runoff water in a rain event.

Since stormwater drains are using gravity sewers, areas that are relatively flat or low flows should be given special attention because they can rarely achieve high enough flows to flush themselves.

Catch basins are the main component in a landscape drainage system. They are boxes available in various sizes and materials that are placed in the ground near areas of standing water to help facilitate proper water drainage and avoid property damage.

The top of the box features a grate through which excess water and solids drain into the underground box. The solid particles then settle at the bottom of the box while the water collects until it reaches the outlet trap. The outlet trap is connected to an underground piping system that leads the water to a local sewage plant or stream.

Once the solids accumulate and account for one-third of the basin’s contents, you must remove the top grate and clean out the catch basin so it can continue to function properly.

Keeping up with your catch basin to make sure that it is functioning properly is the best thing you can do for your landscape and your home. Standing water is unsightly, damaging, and dangerous by promoting growth of bacteria and insects and can cause detrimental damage to your house’s foundation.

The purpose of a catch basin is not just to facilitate in water drainage on your property, but also to maintain a clean and free flowing plumbing system from the yard to the end site. The drain could flow directly through pipes to the local landfill or water source, but it would often become backed up with additional debris and sediment. The bottom of the catch basin solves this problem. This is the area where the solid particles collect so they do not block up the outlet pipes. Regularly cleaning this sediment out of the catch basin is the most important aspect of landscape drainage plumbing maintenance. 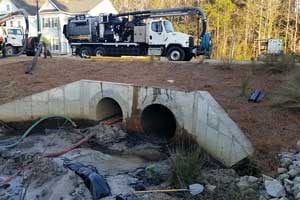 A culvert consists of a pipe for the flow of water in a ditch while also serving as a bridge. Culverts can be small pipes used for residential entrances (underneath driveways) or large diameter pipes used for highways. The movement of the water inside the pipe carries materials such as rock, sand, pieces of wood, etc.

The accumulation of these materials and debris can lead to blockages of the pipe, thereby preventing the free flow of water, which will eventually overflow the ditch. The use of a Vac-Con® vacuum truck will help prevent and clear any culvert stoppage.