A cost-effective and safe alternative to mechanical excavation methods for underground construction applications in private and public land-use areas. 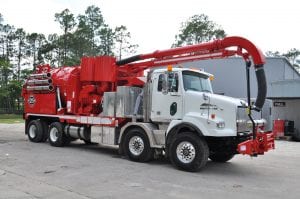 Each day in the United States, Canada and throughout the world there are reports of fires and explosions causing injury and death related to poorly planned and unsafe mechanical excavations (backhoe, trackhoe or other mechanical means) which occur when underground utilities/facilities are accidentally struck or excavations collapse. As contractors, utilities and municipalities perform planned excavations of known underground facilities to locate existing lines, cables and pipes for inspection or maintenance and repairs, the same events often occur. Even when precautions are taken, locates are properly called out (one-calls) and reasonable efforts are made with state-of-the-art technologies (electromagnetic or “EM” and “GPR” or ground penetrating radar sweeps) the results are often devastating. The Plaza explosion in the Kansas City, Missouri shopping district in early 2013 is a good recent example, even when apparently safer “hand excavation” methods were also used.

These incidents can be largely avoided and risks substantially minimized by utilizing techniques such as vacuum excavation.

What is Hydro Excavation?

Vacuum excavation is a process by which an air vacuum is used to move loose soils via air conveyance (vacuum) typically into a spoils or debris tank for later disposal or replacement into the excavation. The process of loosening the soils can be accomplished with either high pressure air or water.

Hydro-excavation is the process which uses high-pressure water to break up and remove the soils via a vacuum system into a spoils tank, which provides a “non-destructive” method to safely excavate.

Hydro-excavation began in the Canadian oil and natural gas industries in the very early 1960’s. Canadian companies realized the safety and efficiency of using a hydro-excavation truck to excavate, and to “daylight” buried oil and gas pipelines and other utility lines. The application was adapted to other heavy industries in Canada, including petrochemical plants, which also pioneered using hot water to dig through frozen soil and permafrost which existed throughout much of the year. Some companies report experimenting with equipment suited for this purpose as early as 1969. Catch-basin sewer cleaning trucks began to be modified for hydro-excavation during the 1970’s and 1980’s. Some companies took vacuum components off the trucks and mounted them on all-terrain vehicles in remote locations. During the 1990’s many Canadian companies recognized the growing demand for hydro-excavation machines and began to manufacture trailer and truck units in many different styles as applications dictated.

By the turn of the century in 2000, hydro-excavation was widely used throughout all Canadian provinces and had begun to appear in the United States.

By 2001, the most successful and largest Canadian hydro-excavating company opened shop in the United States, in Pittsboro, Indiana, a suburb of Indianapolis, while, at the same time, many U.S. firms were already designing and building hydro-excavation equipment of all sizes and types.

Today in 2013, the Canadian Government throughout all provinces and many cities and municipalities has adopted a “zero tolerance” policy for utility strikes. Regulations impose stiff fines, penalties and even imprisonment as a result of the absolute intolerance to utility strikes. Naturally there is a heavy reliance on hydro-excavation methods throughout Canada. In Canada you cannot dig within 45cm of any buried cable or pipe, with any mechanical means. The hydro-excavation industry is a mature and accepted industry with nearly a 45 year history since its inception.

The United States currently has over 20 million miles of buried utilities, cable and pipelines, and while the U.S. DOT prohibits digging within 18” of a buried pipeline or cable, buried utilities are often improperly marked or not marked at all. The only safe means then is to locate utilities by sight (day lighting). Digging by hand is slow and expensive, and using mechanical means is obviously very risky.

The United States has a vast underground infrastructure of pipelines, conduits, wires and cables that affect every individual. This underground infrastructure is critical to our way of life, constantly providing oil and natural gas, telecommunications, electricity, water, sewage, cable TV, and other vital products and services. Disruption of any of these underground facilities could affect the safety of the public, the environment, and continued service reliability that could impact our entire economy.

One of the leading causes of disruption to our country’s underground facilities is external force damage (sometime’s called “third-party damage”) that occurs during excavation activities. This has been recognized by both industry and government. Although such damage occurs far too frequently, it is usually preventable. Responsibility for preventing excavation damage shared by all stakeholders. Advanced planning, effective use of one-call systems, accurate locating and marking underground facilities, and the use of safe-digging practices can all be very effective in reducing underground facility damage. In most states, increased and mandatory use of the state’s one-call system has significantly reduced the incidence of excavation damage, however, damage still occurs.

A single accident or incident involving an underground utility strike can cause catastrophic consequences, cost millions of dollars and affect thousands of people. It could:

> cause personal injury or death

Still today, more than 40% of pipeline system leaks and ruptures caused by damage from outside force, and more than 50% of all cable outages. Simply cutting a phone line, particularly a fiber-optic line is not only locally inconvenient, but could also affect traffic control systems and health services and emergency response systems among others.

Just since 2000, estimated that over 10,000 incidents have occurred involving Natural Gas Lines alone, causing over 1,000 fatalities and over $3 billion of property damage.

Hydro-excavation, in addition to improving overall productivity and efficiency for utilities, municipalities and contractors, can also avoid:

Serious injuries or death to workers and the public

The most effective hydro-excavators today dedicated units designed and built specifically for excavating applications. The hydro-excavation industry is only 13 years old in the United States, and has a long way to go to equal the industry in our neighbors to the north. The U.S. tolerance for damaged infrastructure and interrupted public services is lessening each day. Government practices, laws and enforcement will drive the vacuum and hydro-excavation businesses for decades to come, along with safety, cost and just good common sense and public policy. Hydro-excavation can almost completely eliminate unintended consequences from poorly planned or executed excavation projects involving drilling, trenching, or gross excavations. Hydro-excavation  not only becomes accepted, it’s becoming the “required” method in the oil and gas industries, at power plants, refineries, petrochemical and chemical plants, pharma plants and on 20 million miles of buried lines and cable throughout the U.S.

Vac-Con is a leader in the manufacture of hydro-excavation equipment, and prides itself in innovation to meet a customer or municipal need. Whether you need to excavate via air or hydro, or both, large or small, Fan or PD blower technology, front or rear-mounted booms, Vac-Con can provide any configuration an application demands.

Research for White Paper, and excerpts have been taken from web-site and print literature from some of the following firms: